The Many Theories Behind The Dinosaur Extinction 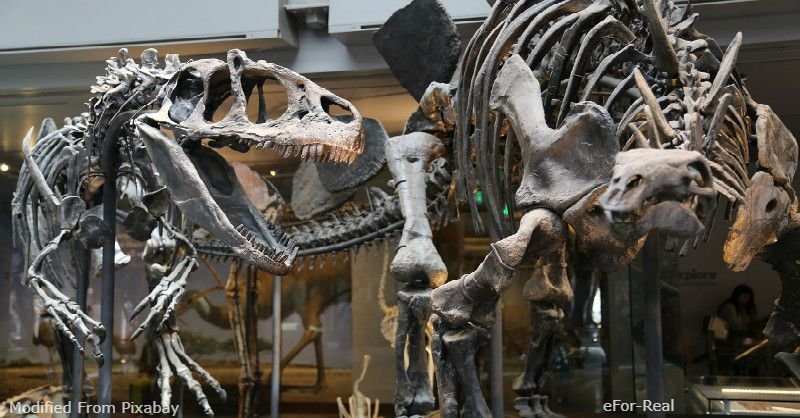 Many new theories behind the dinosaur extinction have been proposed. But before we get to those theories, let’s have a brief recap on dinosaurs.

Dinosaurs are reptiles that dominated the Mesozoic era. These reptiles vary in sizes, and the biggest, the Sauropods, is comparable in size to the modern-day blue whale. Most reptiles, although, are cold-blooded, but It has been a bone of contention on whether the dinosaurs are cold or warm-blooded or just in between.

This post will begin by journeying through the Mesozoic geologic time scale, highlighting a few facts about the dinosaurs. That is, as previously mentioned, before focusing on the topic at hand: the theories behind dinosaurs extinction.

The Mesozoic Era (a brief recap)

Dinosaurs, as previously stated, lived during the Mesozoic era, which spanned between 251 million years ago to approximately 65 million years ago. The era is composed of three periods: Triassic, Jurassic, and Cretaceous, which denote the time of environmental changes and life form evolution and diversity. A few events, particularly those that relate to the dinosaurs, are noted below:

The period was ushered in by a major extinction event, probably caused by an asteroid impact, volcanic eruption, or climate change or perhaps a combination of all of the above. The extinction event was more like a filter that weeded out 90% of the earth species but gave rise to a new form of species, which include rodent sized mammals and the dinosaurs. The dinosaurs thrived and became the dominant creature at the end of the period.

The earth landmasses, during this period, coalesced into one supercontinent called Pangaea, surrounded by the ocean Panthalassan. However, Pangaea, towards the late-Triassic, began to split into two continents: Laurasia in the north and Gondwana in the south. The split and drifting apart of the supercontinent gave rise to the Tethys ocean.

The period was warm and dry given that Pangaea was centralized at the equator spreading out towards the poles with confining ocean circulation. The warm temperature contributed to the non-existent polar ice caps. And like any arid region, the earth was characterized by large desert areas with vast planes.

The period ended just like it began, with another mass extinction, perhaps initiated by an asteroid impact and/or a volcanic eruption. And again, the dinosaurs survived and flourished.

Pangaea continues to split into more continents via the further break up of Laurasia and Gondwana, which led to the formation of more oceans.

The extinction event that ended the late Triassic helped flourish the dinosaurs population during the Jurassic. The earliest known bird, Archaeopteryx, took flight.

The period was warm and moist. Sea level rose and encroached the land. The earth during this period was more subtropical: a large area of drylands became covered by vegetation such as ferns, ginkgoes, and conifers.

The continents continued to split, drifting apart into positions, at the end of the period, which is similar to what is obtainable today.

The period, with drifting plates, saw the flourishing, evolution, and diversification of many life forms including the dinosaurs.

Flowering plants quickly dispersed and populated a large area thanks to bees and wasps.

Unfortunately, these thriving life forms, including the dinosaurs, came to an abrupt end at the end of the period. This was as a result of a major extinction event. And so this brings us to the focus of the paper: What caused this mass extinction that killed off the dinosaurs? Well, some of the various theories proposed are:

The most commonly accepted theory is that the dinosaurs went extinct globally, within a geologic instant, as a result of a chain of reactions from an asteroid impact on earth some 66 million years ago.

Some of these series of reactions, which led to dinosaurs extinction, was the blurring of the sun by dust and ash particles, which in turn disrupted the earth’s food chain. The impact also caused tsunamis and environmental disasters.

Here are some of the overwhelming pieces of evidence that support the theory:

1) Discovery of the impact region in the Yucatán Peninsula (Mexico). The Chicxulub crater, about 180 kilometers wide, dates around 65 million years.

2) The globally, uniformly, distributed thin sedimentary rock, clay layer, popularly known as the K-Pg boundary. The boundary separates the rock layer containing fossils of dinosaur below it from rock layers with no dinosaur fossils above it. The rock layers, in some cases, could be overturned by a tectonic process(es).

3) The clay layer was found to be rich in Iridium, an element not common to earth but abundant in asteroids.

5) Evidence of global extinction of photosynthetic plants and organism

These facts are indeed overwhelming support that the asteroid impact caused the dinosaurs’ extinction. However, many schools of thought believed that the asteroid alone couldn’t have led to the total annihilation of the dinosaurs. There must have been other contributing factors. And so, over the years, the impact theory was modified. We will now take a look at four of these modified asteroid impact theories. A few of them may surprise you.

A paleontologist from Tohoku University in Japan named Kunio Kaiho proposed a hypothesis that the dinosaurs wouldn’t have gone into extinction if the asteroid had struck somewhere else that wasn’t rich in deposits of sulfur, hydrocarbon or organic fossil fuel as present in the Yucatán peninsula.

He further explained that the rich deposits combined with the huge and extremely hot asteroid caused an explosion so great that tons of soot’s were jetted up into the stratosphere and blotted out the sun for an extended period of time. The thick blanket of soot shielded the earth from the light and heat energy of the sun, and this caused the earth’s temperature to cool by about 18 degrees Fahrenheit. This led to a collapse of the ecosystem and ultimately the dinosaurs’ extinction.

This theory is also of the opinion that asteroid played a role in the dinosaurs’ extinction, but argues that long before the impact, the dinosaurs population were already on the decline due to their lack of taste in food.

Professor and evolutionary psychologist Gordon Gallup and his former student Michael J. Frederick proposed that the evolution of toxic plants and the inability of dinosaurs to associate certain plant tastes with toxicity or danger already had their numbers drastically reducing before the asteroid coming.

They backed this hypothesis by proving that the first flowering plants called angiosperms, from fossil records, were already in existence before the asteroid impact. Gallup claimed that the plants evolved to become toxic as a form of defense mechanism. Regardless, the dinosaurs still fed on them despite the discomfort that the plant caused, which eventually led to their dying/waning population before the asteroid finished them off.

Two researchers from UC Berkeley and the Harvard Smithsonian Astrophysical Observatory after analyzing data obtained from a radio survey, conducted on a dust cloud, in the Perseus constellation concluded that all sun-like stars are born with at least a sibling that often spin apart on their own.

Our own star, the sun, is said to be no different and did have an evil twin during its formation. It is proposed that the twin is probably responsible for the dinosaurs’ extinction several millions of years ago.

The dinosaurs’ extinction, courtesy of the sun’s evil twin, is said to have happened as the twin drifted away, influencing gravitationally/ hurling the asteroid that crashed into the earth, which led to the extinction of the dinosaurs. This hypothesis, however, has no solid backing to prove it.

The theory proposes that ancient periods of a prolonged and sustained volcanic eruption in India could have led to a drastic reduction in the dinosaur population before the advent of the asteroid.

It was proposed that massive volcanic eruption in India could have led to a variation in climatic conditions, which included long cold snaps. This was thought to have been a major contributor to the declining number of dinosaurs on earth before the asteroid impacted and finished them off.

Interesting theories, indeed! Who knows, maybe one or more if not all of these theories are correct. But one thing is sure, given the amount of evidence, is that an asteroid played a role in the  dinosaurs’ extinction. But why did the previous two extinctions not kill off the dinosaurs but the third did? Just food for thought.

We would like to hear your thoughts on anything, related to this topic, which needs to be included.