We The Animals: 8 Similarities That Will Blow Your Mind 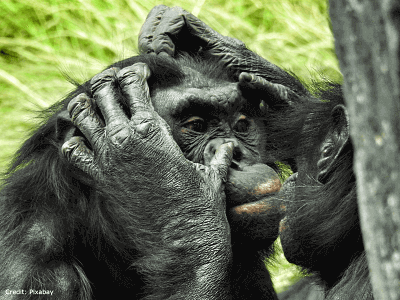 Over the years, there have been many arguments with regards to the evolution of human beings. While some have claimed that human beings evolved from apes, others believe people are the creation of a supreme being, God.  This has been quite a controversial topic, just google it.

But in all open-mindedness, human being evolution from animals may not be so far-fetched given some characteristics that some animals and humans have in common; after all, are humans not tagged as higher animals?

This write-up, using examples, will look at some of the unique behaviors in human beings that can also be found in animals, which may prompt the question: are humans animals?

Very interesting to know that some unacceptable behaviors are not exclusive to human beings; One of these behaviors is promiscuity, and funny enough, some animals have also been found wanting. There is an animal that was recently discovered to indulge in this shameless act.

The female Wattled Jacana is a bird that has a reputation for sleeping around with other male birds beside the partner. The amazing part of this picture is that the male bird stays back in the nest to oversee the welfare of the younglings while the female wanders off in search of lustful pleasure. And there is nothing that the male can do despite being aware of the partner’s escapade. And in addition, there is also the likelihood that the male may also be nurturing babies that are not his. Lucky enough that this female bird does not have any governing body, except karma, that can administer the necessary punishment =:)

Loyalty is a virtue that everyone wants in a relationship, business, and friendship. But, unfortunately, not all can give it. However, we do have exceptional human beings who, by their human nature, can be loyal to a fault, without expecting anything in return.  Some animals, like dogs, are the same.

Dogs are rare species of animals that are known for their trust, loyalty, and ability to socialize—thanks to the presence of certain genes in their body.  Yes, you heard right, they were built to socialize. And more interesting is that these same genes are also in some human beings with the William-Beuren syndrome.

Some dogs have the intuition to sense if someone or an animal is in danger and needs help. They are willing to go to any length for their owners and strangers. Numerous cases exist where dogs have saved the life of another animal. Recently, in a video that went viral, a dog pulled a drowning young deer (fawn) out of water. Similar videos exist; you will come across one if you spent a few minutes on you-tube.

Lies and deception are behaviors very common to human beings. Various individuals lie and deceive for many reasons that range from personal gains to self-preservation, to plain wickedness.  Well, these reasons for lying and deceiving are not limited to only human beings as some animals have also been found wanting in this regard.

Some of the animals that are experts at the game of deception and lies are the Cowbirds, Blue Jays, Cuttlefish, and the Eastern Grey Squirrels.

The Cowbirds, for example, would trick other birds into incubating and nurturing their offsprings. They would start by sneaking their eggs into the nest of their target birds.

The Eastern Grey Squirrel would pretend to bury its nuts while still holding onto it, like in a magic trick, so that any onlookers would be tricked into thinking they found the nut stash.

Cuttlefishes have males that sneak into a protected nest, in feminine disguises, to fertilize guarded eggs.

Karl Lagerfeld couldn’t have said it better, that “the only love he truly believes in is a mother’s love for her child.”

Mothers should be held in high regard, always. This is because their sacrifice, passion, and love cannot be compared with anything on earth. Mothers are the first point of contact for a child in the womb. They are willing to protect their children from any form of attack even if it requires laying down their lives.

Some animal mums, just like human beings, have similar behaviors when it comes to showing motherly love towards their babies; For example, the octopuses have a touching story that speaks of the unique sacrifice they make for their offsprings—they do not leave the birthplace nor eat during the period that their kids are groomed. And this can be for as long as 4 years. In another instance, some spiders carry their eggs in the mouth until they hatch. This implies not feeding for the entire period (could take as long as a month). Meerkats are also known for their ability to teach their young ones how to hunt dangerous meals like scorpions. Other animals that fall into the category of super moms are the whales, dolphins, and pandas.

If you think that only human beings can hold a grudge against you with the intention to do you harm, when you least expect it, then you had better think again.

Crows are one of the animals that are smart enough to identify the person who is not friendly to them, and attack such person when he or she least expects it. They are also known to inform their mates of their grudge with a particular person so that they too can join in the attack of the said individual, on sight— a very we the animal character, wouldn’t you say? So be good to your fellow humans and crows to avoid their wraths.

6) Babies On The Back

I do admit that this should be under the category, motherly love. But I wanted to use “the babies on the mum’s back” to show a common similarity between both human beings and animal mums.

One of the means of nurturing and bonding between a woman and her child is by carrying the child on her back. It also helps to comfort the carrying baby.

This act of carrying a baby on the back is not only limited to human beings as some animals have also been documented to give birth and carry their offsprings on their backs; an example of such animals that brood their offsprings from the back are the frogs. The female frogs lay eggs, and with the help of the male frog, these eggs are loaded into a pouch on the female’s backs where they are nurtured until they hatch. Scorpions and spiders have also been documented to carry their babies on their backs. They use their backs as a means of support for their babies till the babies are old enough to stand on their own.

Human beings, in another example of we the animal, are known to engage in unhealthy competitions for material things that it breeds contempt and bitterness. This trait can also be found in animals as they compete for mates, territory, and food to list these few. A good example of bitter rivals is the bald eagle and the red-tailed hawk; many other examples abound of bitter rivalries in animals; again, just play around on you-tube for a bit.

Despite some animal rivalries, sometimes, a miracle does happen such that two fierce rivals end up caring for each other as was the case with the bald eagle and the youngling of the red-tailed hawk. If such a miracle can happen, often, amongst people, who are known to possess a higher level of intelligence than these animals, then conflicts between nations and across ethnicities will be significantly reduced.

As the saying goes, “He, who fails to plan, plans to fail.”  So yes, most humans plan as it influences the odds of a project being a failure or a success. Interesting enough, some animals, like the great apes and ravens, are known to plan.

Ravens, a member of the same family as the crows (the grudge-bearing birds) were recently documented to be good planners. They have the ability to plan ahead, like some humans, and delay small immediate gratifications for future bigger gains. These points, and many more out there, do support the answer to the question: are humans animals?