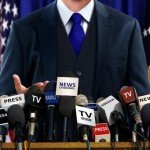 Please post, in 338 characters, any valuable and unique information that relates to POLITICS?

Please read this information before posting on Discoverybit.com.