The Trends: Average US Wage, Tuition Fee, Child Upbringing Cost And Student Debt Over The Past 22 Years 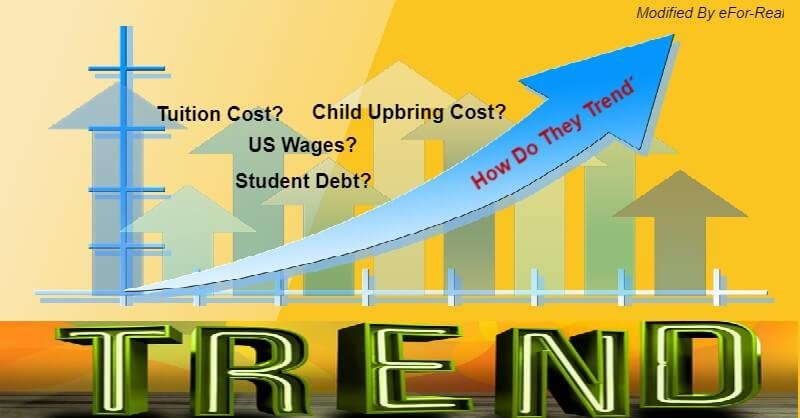 This post bothers on the average U.S. wage for the past 22 years and aims to highlight some key expenses – tuition fees and yearly costs of child upbringing till 18 years, for instance – of an average U.S family.

Economic growth in the U.S., in the last couple of decades, has been comparatively slow. The gross domestic product (GDP) growth rate has generally been on the lower end for the last 22 years. But despite the slow economy, in recent times, the real median household income, which gives a good indicator of middle-class income, was $59,039 in 2016, a record level since 1998. This statistic signifies how stagnant or low the purchasing power of middle-class family income has been over the last 22 years.

As it is evident from the numbers alluded above, the average income has not increased a great deal in recent years. Consequently, an average American has been careful of how he/she spends. The yearly cost of raising a child, or children, and the cost of living, in general, have increased over the course of the past 22 years.  College fees and student loans, just as healthcare has been a hot topic in recent times, have also been a subject of much attention.

Increasing college tuition fees and job wages, which have not ascended as much, have led to a rise in the number of college and university students opting for loans. “Americans, according to the Pew Research Center, owed about $1.5 trillion in student loan as at the end of March 2019, which is more than two times what they owed a decade earlier.” This clearly shows that the average student loan debt has increased a great deal, recently, and that a lot more graduates now are in debt.

This post will explain the four key areas put forth in the beginning. The average U.S. wage for the past 22 years, the yearly cost of raising children till the age of 18, followed by various college and university tuition fees, and how many students graduate with loans that need to be repaid. These are the pivotal areas that will be discussed in the following passages, especially with regards to how these variables have trended relative to each other over the last 22 years.

But before these topics are discussed, a couple of data, below, were analyzed for this post. Some important facts derived from the analyses were then compared to prior opinions, from reliable sources, to enable a more accurate and unbiased evaluation of these 4 sectors.

Some quick facts from the data and chart

B) The current child upbringing cost per year, with a 22-year increase of 12%, is about 29% of the current average wage index, which saw about a 68% increase over a 22-year period.

C) The 4-year in-state public institutions have the highest percentage increase (194%) in tuition cost in the past 22 years.

D) The 4-year out-of-state public institutions have the highest public tuition rate and the second-highest percentage increase (186%) in tuition cost in the past 22 years.

E) The 2-year in-district public institutions have the lowest tuition rate, but the third-highest percentage increase (161%) in tuition cost in the past 22 years. The tuition rate lends credence to the fact that going to a community college would save students more money relative to other institution types.

Despite the fact that the last 3 years have seen an increase in average wages, the average wage index suggests that has not been a constant feature of the last 22 years. Considering the increasing yearly costs and expenses, the wage increases have not been enough, which also reflects in the purchasing power, which hasn’t increased much either.

But as this article points out, even these numbers (Average Wage Index) can be misleading due to low unemployment and rising inflation over the course of the last 22 years, and coupled with the fact that more people have started going back to work and taking up multiple jobs. This has led to an increase in incomes, regardless of wages that have stagnated over the years. Furthermore, as the article alluded to above, according to the Census Bureau, “earnings for men have declined since the 2008 recession.”

Therefore, considering the statistics and figures, the average wage has not risen significantly over the last 22 years. It has certainly not increased enough in comparison to costs and expenses like those of college tuition fees, raising children, and of living, in general—-the main costs that will be discussed in the following passages, and which can also be seen from the charts above.

2) The yearly cost of raising children in the U.S.:

Raising a child is one of the most important aspects especially with regards to managing one’s income and expenses. From the data cited and observations made above, it is clear that, on average, wages have been stagnant for several years. The cost of living has been increasing at a disproportionately greater pace to the rise in wages or income.

As per the U.S. government estimates, it currently costs parents $13,290 a year to raise one child. That comes out to over $230,000 for raising a child until he/she reaches 18 (see Table 1 and Figure 1).  Looking after a child until he/she turns 18, based on these statistics, does requires smart cost-management skills.

One of the reasons why the cost of raising a child is high and will keep going up is because of the so many new bills, such as costs related to the internet, subscriptions, entertainment, health, education, and food have meant that raising a child has become costlier than it used to be 20 to 30 years ago. Daycare costs need to be factored in as well.

American families, according to a report from Child Care Aware that came out in 2017, today spend an average of $9,697 per year on day-care, which is approximately 16% of their annual income. With increasing costs of services and necessities, spending regarding raising children has gone up several times. As a glaring statistic suggests, childhood expenditures have shot up by 40% between 2000 and 2010.

3) Tuition fees for the past 22 years for all types of colleges and universities:

As if raising a child isn’t costly enough, once the child turns 18, college becomes the next financial burden for parents. College tuition has been getting more expensive every year in the U.S. for the last 22 years. The tuition fees have been increasing exponentially for the last couple of decades.

Added to the tuition fees are the costs of accommodation, transportation, books and study material, and food, which cumulatively sums up to thousands of dollars in spending on college. Average tuition fees and education costs have risen significantly over the last 22 years for both private and public national universities. Some parents choose to send their kids to in-state universities or colleges but the statistics suggest that fees for both in-state and out-state university students have increased greatly since the late 1990s (see the percentage increase in the table above).

4) U.S. students that completed school without debt vs with debt in the last 22 years:

Low wages, costly standard of living, and high tuition fees leave very few options besides opting for student loans for those who want to pursue a college degree. The number of students graduating with loans has been increasing rapidly for the past 22 years and now, in 2019, more Americans are under the burden of student loan debt than ever. In the class of 2018, 69% of college students opted for student loans and they graduated with an average debt of $29,800. This includes both private and federal debt.

This figure shows that a great number or percentage of students complete college with debt in contrast to those without debt. 70% of students, according to Edvisors, take out student loans that could amount an average of $33,000.

More than 44 million borrowers, according to Forbes, collectively have a student loan debt of $1.5 trillion in the U.S. To sum it up, around 70% of people that attend college end up with student loan debt, which has only been increasing at a great pace over the last 22 years. For more numbers of the students that graduate from public, private, and non-profit institutes, you can check Forbes’ in-depth report on student loans.

Wage growth, with regards to future prospects, is projected to increase in the coming years, although at a slow rate. For the most part of the last 22 years, the U.S. economy has been in turmoil. But that trend has started to change in the last 3 to 4 years as the average income seems to be going upwards steadily.

Expenditures are not projected to slow down a great deal but the increase in wages, although not very prominent, does seem to show a positive sign. The GDP growth rate is expected to stay between 2 and 3% in the coming years and the U.S. economic indicators look positive. Therefore, it’s not all doom and gloom in 2019, even though the income-cost balance still needs to be properly and smartly managed.