6 Recent Health Contradictions That Would Make Your Head Spin! 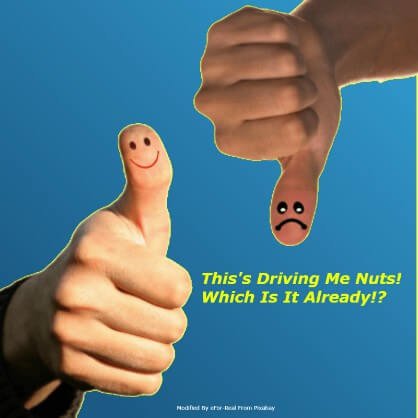 The first contradiction focuses on the same genes that both negate and encourage human survival. These genes are responsible for the risk of heart disease and human reproduction.

Heart disease is one of the biggest killers of both men and women, accounting for millions of deaths worldwide. For such a disease that has probably been killing since human inception, it may come as no surprise that genetic evolution has not been able to remedy the situation. In addition, scientists, having identified these genes, may be unable to use modern techniques like gene editing tool to remove these problematic genes.

This is because, according to a relatively recent study, these “bad” genes, which increase the chance of heart disease by 50%, have also been linked to greater success of human reproduction. That is, without these genes, people won’t be able to conceive children, which in turn could lead to human extinction.

In this case, evolution may seem to have traded off longer healthier life for successful human reproduction. This finding also begs a pertinent question: does this also imply, all things being equal, that people who are unable to bear children have a lower risk of suffering from this fatal disease?  Just curious!

An enzyme, BACE1 (also called β-secretase), like the previously discussed genes,  could both positive and negatively after the human body.  The BACE1 enzyme creates the primary peptides (beta-amyloid peptides) found in the beta-amyloid plaques in the brain. And these plaques are primarily associated with the development of Alzheimer’s disease.  According to scientists who experimented on mice in the hope of finding a cure for the Alzheimer’s disease, the reduction of the BACE1 enzyme led to lower production of beta-amyloid proteins, which in turn halted and reversed the Alzheimer’s disease. However, the reduction has to be timed for it to be effective. In other words, the reduction has to take place when the brain is healthy and strong enough to fight against Alzheimer’s disease by eliminating already-formed plaques. This is also based on the condition that new plaques are created less than the rate at which older plaques are removed by the healthy brain.

If the BACE1 enzyme is removed early at the inception of the brain (childhood: when it is at it’s healthiest), severe and debilitating developmental defects will occur. The is because the BACE1 enzyme plays an important role in the creation and formation of important peptides which are very crucial for the development of essential and beneficial proteins.

These contradictions are not limited to components in the human body, but can also be seen in external factors like food and drinks. Let’s begin with the first, cheese.

3) Cheese Reduces the Rate Of Heart Disease Or Not?

Cheese has been stated to have high levels of saturated fat, which have been linked to the Low-Density Lipoprotein (LDL) cholesterol, and heart disease. LDL is bad cholesterol that causes a heart attack. People suffering from the effect of bad cholesterol are advised to avoid cheese.

But here is the shocker; what if someone said that cheese could reduce the chance of heart diseases instead of increasing it?  Well, researchers from China and Netherlands claim that the consumption of a given amount of cheese every day is actually beneficial to the human body.

The experiment concluded an associative benefit of cheese and improved health conditions. The research found that cheese is most beneficial when 40 grams of it are consumed every day as it decreases the risk of stroke by 10% and coronary heart disease by 14%. The research was conducted over a period of 10 years with over 200,000 people.

The benefit of cheese, according to scientists, has been related to many useful ingredients like protein, calcium, and probiotics. The scientists have also noted that the saturated fats are likely benign with associated good cholesterol, High-Density Lipoprotein (HDL), and thus safe for consumption.

4) Coconut Oil: Pathway to a Healthy Heart or Not?

Coconut oil is another consumable product that falls into the category of the subtitle relating to cheese. This is because of the potential health ramification associated with cholesterol production. Studies have indicated that coconut oil is a bad choice for cooking because of its high saturated fat—90% of coconut oil comprise saturated fat. And the impact of saturated fat has already been discussed in the previous title, “Cheese Reduces the Rate Of Heart Disease Or Not?”

But another relatively recent study from the University of Cambridge just contradicted the negative health impact of cooking with coconut oil. The study now indicates that coconut oil is good for the heart. According to the study, it lowers the risk of a heart attack when 50g of it is consumed every day for 4 weeks.

See the head-spinning predicament, yet? They are about to give me a heart attack.  Okay, moving on to other contradictions that you would never believe.

5) Amino Acid: Essential for health But May Enable Cancer

Asparagine, also an amino acid, basically works to maintain balance in our central nervous system. It keeps one from being overly calm or nervous. The amino acid has also been known to reduce the risk for type 2 diabetes, allergic and autoimmune reactions, and joint pain. Asparagine also improves memory and mental performance, sleep quality, and flexibility.

But unfortunately, according to a relatively recent study, breast cancer, lymphoma, and intestinal cancer thrive in the presence of these dietary nutrients, amino acids. According to the study, “cancerous cell must go through huge changes in order to spread -- it must learn to break off the main tumor, survive in the bloodstream and thrive elsewhere in the body. It is this process for which researchers think these amino acids are necessary.”

Wow, see how it just went from great to worse. These contradictions really suck, and it doesn’t stop here as it also impacts the field of coffee.

6) Coffee Is Dangerous To The Human Body Or Not

Coffee has a lot of positive effects like protecting against liver cancer, reducing the risk of heart disease, colorectal cancer, Alzheimer’s disease, Type 2 Diabetes, and Parkinson’s disease. Coffee can also prevent retinal damage and help burn body fat. But on the other hand, it could be carcinogenic in addition to other problems. The carcinogenic substance, acrylamide, occurs during the process of brewing coffee in hot water. Acrylamide is a chemical which can cause cancer or reproductive toxicity in the human body. Please see more on coffee via the video.

The Many Shades Of Coffee

In truth, depending on the perspective, all aspect of life and products do have both positive and negative sides.  So I guess these contradictions, which will keep changing as more insights are gained on how the body functions, are no different. Thanks for reading.