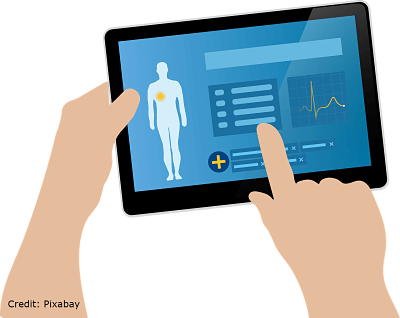 Amazing apps are popping out all the time, thanks to human ingenuity. Some of these Apps, like the recent app from the search engine giant, Google, can perform impressive human feats that are capable of simplifying/resolving problems in the travel, banking, health, and security sectors to mention these few.  This post will focus on health inclined apps.

Recently, many health apps, like Dr. Google, have been developed with brilliant functionalities that can collect a patient’s data and diagnose an ailment with a high degree of precision.  Functionalities like these are sure to make these apps very welcoming to society. This is in addition to the convenience and affordability that these apps provide—most of them are freely available 24 hrs to the user, and also come without the need to schedule a doctor’s appointment—awesome!  Maybe there is a chance that, in the nearest future, these apps could completely take over a doctor’s job? Okay, let’s not get carried away—just kidding, Doctors; I am sure your jobs are completely safe.

So what are these new health apps that have gotten this writer all thumbs up? This post will review 9 of these apps, using videos in some cases; let’s beginning with the Dr. Google app.

The Dr. Google App is a recent health app that is being promoted by the search engine, Google. The app was developed by a start-up company, Senosis, which was bought by Google.  The app has the functionality of being able to diagnose diseases and respiratory condition like asthma. It does this by measuring the blood flow and breathing pattern of a patient via the camera flash and microphone of a smartphone. The camera flash captures the blood flow pattern while the microphone listens for breathing irregularities.

If you think this app is cool then check out the Epic app with a similar concept to the Google app, but with a difference in functionality.

2) Monitors Diabetes Without Piercing The Skin

The Epic app is another app that translates the image obtained from the camera of a smartphone into data that gives the reading of a patient’s blood pressure, temperature, heart rate and respiratory rate measurements to mention these few. The creators of the app have also claimed that the app can diagnose pre-diabetes by measuring the insulin resistance level of anyone. It does this by using the proxy—variation in a person’s pulse which can be related to the blood glucose concentration of the individual. The app is said to be effective for monitoring type 1 and 2 diabetes.

This is a very cool app as it enables anyone to adjust their lifestyle before they balloon into full-blown diabetics. Keep your eyes peeled for the estimated release date at the end of the year 2017. And by the way, it will be free!

3) Diagnosis Ailments Based On Input Symptoms

The Ada app, unlike Dr. Google and Epic app, diagnoses an ailment based on the symptoms that one feeds into it. In addition to the diagnosis, the Ada app also advises one on the need to see a real doctor—this depends on whether the ailment can be treated at home or not, thereby saving one’s time and money in the case of the former.

Here is a video showing how the app works:

Ever heard of an app that can detect Atrial Fibrillation (AF or A-Fib)? Well, the Cardiogram app in an Apple smartwatch can detect this condition. Before we go any further, what is an A-Fib? A-Fib is an abnormal heartbeat that can cause the blood to clot with resulting consequences, including death? The concept of this ingenious app is based on tapping the app into the photoplethysmographic (PPG) sensors, you know, the kind you find in most smartwatches that are used in monitoring one’s heart beats while exercising. The app is said to be able to detect A-Fib with a 97% accuracy rate.

This is an awesome app to have because it is on the wearer most of the time. But nevertheless, nothing beats the conventional method of monitoring A-Fib—It is recommended you go consult with a real doctor.

Are the next apps as impressive as these? Continue reading to find out.

The app, Eyeagnosis can diagnose the condition, diabetic retinopathy with an accuracy of a human pathologist. Diabetic retinopathy is a common cause of vision loss from diabetes; a process whereby the blood vessels in the retina are damaged as a result of diabetes.

The app works with the use of a 3-dimensional (3-D) printed lens and an artificial intelligence-based smartphone app. The 3-D lens captures the retina image for the smartphone app to interpret.

The app, according to the developers, is cheap, efficient and an affordable form of early and easy access to diagnose the defective eye condition.

The next app uses a different concept to help the visually impaired.

6) Improves Sight For The Visually Impaired

The new app, Relúmĭno, in combination with virtual reality (VR) gear headset has been developed, by Samsung, to aid the visually impaired see clearer. The gadget works by connecting the VR gear headset to a smartphone. The Relúmĭno app, in the smartphone, then processes and filters the image according to the setting of the user. The clearer processed image is then viewed, by the user, through the headset.

Here is a video that shows how it works:

Pretty ingenious, right!? Especially if a less obvious VR viewer can be developed. We are not done yet, keep going.

The app, BiAffect, which uses apple research Kit, will blow your mind. The app diagnosis depression and mania by utilizing how one interacts with the typing keyboard of one’s smartphone to track and predict a person’s mental health and mood; that is, whether a person is depressed or mania. It uses these parameters, during typing, for diagnosis: how hard a person presses the keyboards; how fast a person types; the frequency of one’s spell checking; and backspace usage.

8) Track A Kid Fever Over Time

If you are not mouth agape at this time, you will be very soon. The TempTraq app enables you to place a high tech sticker-like thermometer underneath the arm of a kid, and then synchronize the thermometer with the app on your smartphone such that you can remotely monitor the temperature of the child.

The app, by aiding you to monitor, remotely, the temperature of the child would allow you to track the fever behavior over time, including how effective treatment has been over a given period. The temperature log from the app can also allow for an informed and articulate discussion with your doctor.

The app is so cool because it can be used to monitor multiple kids at once.
Here is a video showing how the app works:

I told you that you would be impressed; pretty sure that you are now eager to get to the next app.

This upcoming app, YO Home Sperm Test Kit, is said to possess the ability to test fertility, with 98% accuracy, in men via a combination of disposable semen collecting kit and the smartphone processing app. The semen is placed inside the disposable kit and inserted into an accessory case that allows a camera to illuminate and magnify the sperm.  The app, via a video, records the number of sperms through an algorithm and determines the total number of sperms that are moving. It indicates infertility If the number of moving sperm is below 40%.

The app is said to be attractive because of the privacy that it provides. It is also cost-effective. Pretty much buy it on Amazon for $59.95/£56.

True that these apps provide privacy, convenience and are also cost-effective to allow for availability to everyone; I still believe that nothing beats seeing a real doctor, regardless of what these apps can do.

Please, let us know if you have come across any other relatively recent and extraordinary health apps, as these apps are being developed almost every day.